Last weekend marked my seventh wedding anniversary – yes, for those of you reading that attended this social event of the season it was seven years ago we made you drive down a long windy dirt road in the middle of nowhere Maine. For seven years my husband has had the privilege of putting up with me every day. Traditionally the seventh anniversary is copper… ugh copper. To begin with I am a terrible gift giver (honestly, terrible) but throw a material like copper at me and I might as well just write you a check and call it a day.

I would like to offer up this suggestion – let’s update the traditional wedding anniversary gift schedule – instead of paper, wood, iron, copper route I would like to suggest something a little more modern (go with me on this):

Year One:  “The Princess Bride” theme anniversary – anything remotely related to the movie (or book) will do.

Year Two: bathroom renovations, for this anniversary you will need to call a contractor to install a double sink in your en suite (or build you one if it doesn’t already exist)

Year Three: Separate vacations, for your third year you are both allowed to take a long 4 day weekend away from eachother.

Year Four: Weekly cleaning services. For the fourth year, you pull together all of your gift giving resources and sink that money into someone who will clean your house for you.

Year Five: “The Star Wars” anniversary, anything remotely related to any of the movies (the ORIGINAL three) will do

Year Six: If you have children your sixth anniversary present should be sending them to their grandparents for a week. One whole week – kid free – happy anniversary.

Year Eight: Job switch – for your eighth anniversary each of you gets to spend one day at the others job, this way you can FINALLY understand all the venting at the end of the day

Year Nine: craft projects – for your ninth anniversary you both get to graphically show your love using nothing more than macaroni noodles, cardboard, glue and glitter.

Year Ten: Diamonds, diamonds for everyone.

Next week my little baby girl will start kindergarten and I’m all flummoxed by this, how did it happen? Did we enter some kind of wormhole? Did I waste her early childhood by forcing her to hang out with disinterested daycare workers? How do we build a time machine and go back in time?

Lucy is ambivalent about the whole thing, she’s worried more that she has to wear a uniform than she is about attending ‘big girl’ school, she excited that she gets and iPad and that her friend Grace is going to be in her class but I guess that is the difference between someone standing on the precipice of something as opposed to someone looking back at it from the other side. I am excited for her and the experiences and adventures that she will have the older she gets, I am also terrified of said experiences that she will have. Ugh, parenting.

Sometimes when I am bored at work* and think that I should spend more time writing on my blog (only I can’t because of the stupid ridiculously high firewall in my office) I read other people’s blogs instead – clearly the agency I work for is cool with me spending my days reading about other people’s experiences on Tinder (Oh my god – check that out) or stay at home parenting. But through all of my time reading pieces of other people’s lives I can’t help but notice that there is a high rate of serious depression going on with bloggers around the world. I notice that some of my favorite writers are always saying things like “I was in a funk last week” or “I was too depressed to get off the couch”. Now, don’t get me wrong depression is a terrible thing and those that struggle with it really struggle with it but it makes me realize that it is yet another barrier to me never quitting my day job to become a famous writer. Yes, that’s right to get what I really want from life I need to suffer from a debilitating psychiatric disease. If only I had to struggle to get out of bed every day and cope with my life… if only.

It’s sad really, I have so much potential.

*If we work together – I’ve never been bored at work, ever.

Today Lucy turned 5. I am shocked that this happened, I feel like 5 is a serious turning point, gone is my baby girl and in her place is a grown up opinionated child- ready to start kindergarten in a few weeks and then, next stop… college? Fortunatly I am still her best friend (or is it Daddy?) Here she is for the past three years: 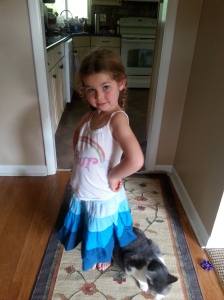